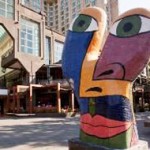 Once known as ‘the face of Melbourne,’ Ophelia by Deborah Halpern was inspired by the character from Hamlet, full of both love and sadness.

Halpern says Ophelia is the cousin of Angel, the sculpture that adorned the moat of the National Gallery of Victoria for nearly 20 years and now lives upstream at Birrarung Marr. Together they bring life and humanity to the river. 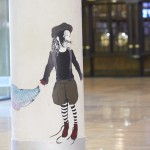 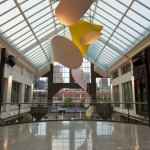 Riverside Corolla  draws the best of minimalisation and the accentuation of form to create a flowing suspended piece that consists of six separate petals. A ‘corolla’ is the arrangement of petals on a flower. Suspended above all three levels of Southgate’s main entrance the Riverside Corolla enhances the central atrium space.

Of his artwork, artist John Meade said: ‘Riverside Corolla is a reflection of the natural materials that have been incorporated into the Southgate redesign and the prominence of the river to the space.’

Sign up to the Southgate eNews to get the news first and exclusive subscriber offers.